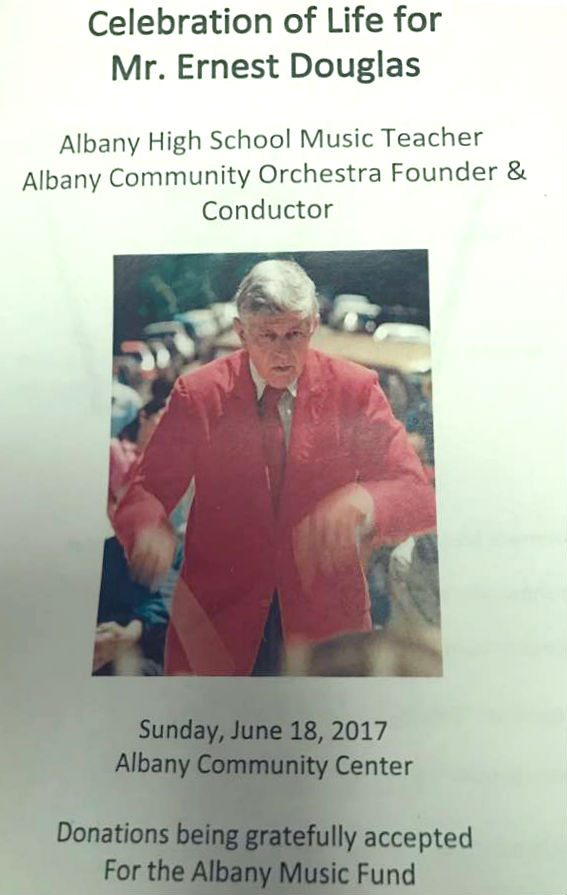 June 18 marked a Celebration of Life for Mr. Ernie Douglas, who taught Band and Orchestra at Albany High School for 35 years. Mr. Douglas passed away in March at the age of 94. Friends, family and former students gathered at the Albany Community Center to share music and memories in his honor. Current AHS teacher Craig Bryant who attended commented “It was beautiful to hear how many lives he touched through music.”

A WWII veteran who played clarinet, oboe and saxophone, Mr. Douglas began teaching at Albany High School in 1952. His daughter, Cathy Douglas, told the East Bay Times that AHS was “a perfect match” for her father because “it was a small school. He not only wanted to teach musicians but he wanted to get to know the people.”

Mr. Douglas was a leader in many East Bay music education groups and founded the Albany Community Orchestra, which became the Albany Chamber Orchestra. He also started the AHS music supporters group that eventually evolved into Albany Music Fund.

AMF is grateful for all the donations that have been made in Mr. Douglas’s memory by AHS music alumni and other friends. These gifts will go to support students today in the same program that Mr. Douglas helped to build and grow in so many ways during his decades teaching in Albany.